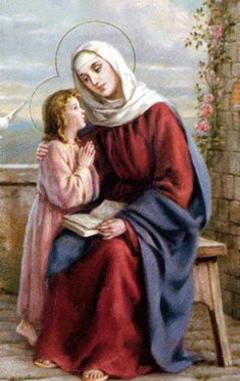 Tradition holds that St. Anne, or Ann, is the mother of the Virgin Mary, the mother of Jesus.  There is no mention of Anne in the bible.  Non-biblical books from the early Christian centuries acknowledge Mary's parents as Joachim and Anne.  These sources claim that Joachim and Anne were childless for many years of their marriage.  The angel Gabriel appeared to them separately and declared that they would in fact bear a child who must be dedicated to God.  Hence, Anne became the mother of the Blessed Virgin Mary.

As the woman chosen by God to be the Mother of His Son, the Virgin Mary is known around the world as a good, holy, and exceptional woman.  Certainly she must have had extraordinary parents whose example of faith and trust in the Lord impacted her in a way that would change the course of history forever!  These parents, named Joachim and Anne, have been honored throughout the ages for their dedication to raising their daughter, Mary, to be a woman fully devoted to God.