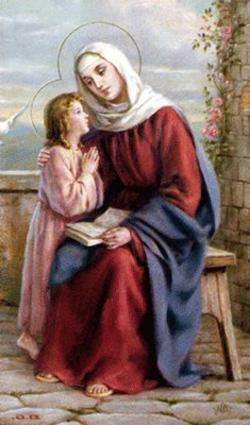 What little we know about Saint Anne comes from the apocryphal Gospel of James (ca. 145 AD), also known as the Protoevangelium of James [PJ].  According to tradition, Anne (Hannah in Hebrew) was born in Bethlehem and married Joachim of Nazareth, both descendants of King David. Joachim is described as “a rich and devout man,” who regularly gave to the poor and “made a double offering to the temple” in expiation for his sins (PJ 1:1). Because Anne was barren, the temple priest rejected Joachim’s sacrifice, as childlessness was interpreted as a sign of divine displeasure. There was no greater misfortune for a Jewish person than to be childless. Had not God promised to His people, through Abraham, “descendants as countless as the stars of the sky and the sands of the seashore” (Gen. 22:17)? Joachim consequently “went into the desert to fast and pray” for forty days and forty nights (PJ 1:4). But Anne remembered the faith of her ancestors, and with renewed courage prayed: “God of my fathers, bless me: Hear my prayer, as You blessed the womb of Sarah, and gave her a son Isaac!” (PJ 2:4). Her prayer was heard: “Behold, an angel of the Lord appeared to her and said: ‘Anne, Anne, the Lord has heard your prayer: You shall conceive and bear, and your offspring shall be spoken of in all the world’ ” (PJ 4:1). In an outpouring of faith, she who was to be Mary’s mother immediately consecrated her future offspring. An angel appeared also to Joachim, saying: “Joachim, Joachim, God has heard your prayer. Go on your way, for your wife will conceive” (PJ 4:2). And Joachim offered a thanksgiving sacrifice of ten she-lambs without spot or blemish for the Lord God, twelve tender calves for the priests and elders, and a hundred goats for all the people. He then returned to Jerusalem and embraced Anne at the city gate (PJ 4:3-4).

Tradition further narrates that in gratitude to God for the blessing of a daughter, Joachim and Anne vowed to consecrate Mary to God in the Temple as soon as her age permitted it. And they did. Mary was scarcely three years old when, accompanied by her parents, she first set foot in the Temple. Here the noble child was admitted to the elect group of virgins consecrated to God (PJ 7).

It is commonly believed that the Blessed Virgin lost her beloved parents when she was about eleven. Just when she was living a life of angelic happiness in the house of the Lord, Mary had to taste of that chalice which fills the hearts of children with the most human sadness. The precise time of Joachim’s and Anne’s blessed passing is unknown, but the Fathers of the Church affirm that Mary became an orphan when still in the Temple. Yet her faith and hope made her see in the death of her parents the passage from exile to homeland, from earth to heaven. The time of Mary’s presentation in the Temple is unknown. The Church celebrates the feast of the Presentation of Our Lady on November 21st.

Anne, blessed above all others, we, too, bring our reverence, for you have given birth to the girl from whom He will come Who is the basis of all our hope. Blessed, indeed, above all others, and blessed in your offspring! The tongues of all believers sing the praises of your child. Every voice is raised in joy at her birth. How worthy Anne is of praise, most worthy, for she received the message of God’s goodness, and brought forth such fruit that from it would come our Lord, Jesus.  — St John of Damascus (8th cent.)

Who is Saint Anne?

With my heart full of the most sincere veneration, I prostrate myself before thee, O glorious Saint Anne. Thou art that creature of privilege and predilection, who by thy extraordinary virtues and holiness didst merit from God the high favor of giving life to her who is the Treasury of all graces, blessed among women, the Mother of the Word Incarnate, the most holy Virgin Mary. By virtue of so lofty a privilege, do thou deign, O most compassionate Saint, to receive me into the number of thy true clients, for so I profess myself and so I desire to remain throughout my entire life.

Shield me with thine effectual patronage and obtain for me from God the power to imitate those virtues wherewith thou was so plentifully adorned. Grant that I may know and weep over my sins in bitterness of heart. Obtain for me the grace of most active love for Jesus and Mary, and resolution to fulfill the duties of my state of life with faithfulness and constancy. Save me from every danger that confronts me in life, and help me at the hour of death, that so I may come in safety to paradise, there to sing with thee, O most happy mother, the praises of the Word of God made Man in the womb of thy most pure daughter, the Virgin Mary. Amen.